THOMAS TALLIS SCIENCE
Search
In this section we will discover how the number of chromosomes are halved during meiosis and then combined with new genes from the sexual partner to produce unique offspring. Gene mutations occur continuously and on rare occasions can affect the functioning of the animal or plant. These mutations may be damaging and lead to a number of genetic disorders or death.

Very rarely a new mutation can be beneficial and consequently, lead to increased fitness in the individual. Variation generated by mutations and sexual reproduction is the basis for natural selection; this is how species evolve. An understanding of these processes has allowed scientists to intervene through selective breeding to produce livestock with favoured characteristics.

​Once new varieties of plants or animals have been produced it is possible to clone individuals to produce larger numbers of identical individuals all carrying the favourable characteristic. Scientists have now discovered how to take genes from one species and introduce them in to the genome of another by a process called genetic engineering. In spite of the huge potential benefits that this technology can offer, genetic modification still remains highly controversial.

​(BIOLOGY ONLY) Advantages and disadvantages of sexual and asexual reproduction


Gametes join at fertilisation to restore the normal number of chromosomes. The new cell divides by mitosis. The number of cells increases. As the embryo develops cells differentiate. Knowledge of the stages of meiosis is not required

DNA and the genome 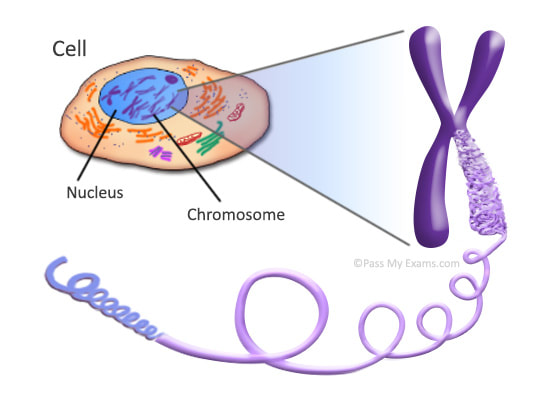 ​The genetic material in the nucleus of a cell is composed of a chemical called DNA. DNA is a polymer made up of two strands forming a double helix. The DNA is contained in structures called chromosomes. A gene is a small section of DNA on a chromosome.

Each gene codes for a particular sequence of amino acids, to make a specific protein. The genome of an organism is the entire genetic material of that organism. The whole human genome has now been studied and this will have great importance for medicine in the future.

Students should be able to:
​DNA is a polymer made from four different nucleotides. Each nucleotide consists of a common sugar and phosphate group with one of four different bases attached to the sugar. DNA contains four bases, A, C, G and T.

A sequence of three bases is the code for a particular amino acid. The order of bases controls the order in which amino acids are assembled to produce a particular protein. The long strands of DNA consist of alternating sugar and phosphate sections. Attached to each sugar is one of the four bases. The DNA polymer is made up of repeating nucleotide units. 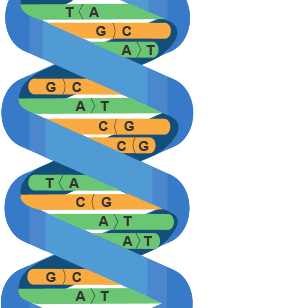 Proteins are made up of chains of amino acids. The type and sequence of the amino acids determine the type of protein. The DNA controls the production of different proteins, which is called protein synthesis. The code for creating proteins comes from genes, which are small sections of the DNA. Each gene acts as a code or a set of instructions for making a specific protein.
​
Proteins are made in structures called ribosomes, which are found in the cytoplasm of the cell. Therefore, the information required to make the protein needs to be transferred from the DNA in the nucleus to the cytoplasm. This is done by a molecule called ribonucleic acid (RNA).
The main stages of protein synthesis are Transcription and Translocation. Two types of RNA molecules are used in the process; messenger RNA (mRNA) and transfer RNA (tRNA).

The coded instructions for producing a specific protein or RNA molecule are contained in sections of the DNA called genes.
An enzyme unwinds the section of DNA to form RNA. Here the RNA nucleotides line up with their complementary bases transcribing the information from the DNA to RNA. The RNA is made up of ribonucleotides, which are matched to their compliments in the DNA.
A pairs with T
C pairs with G
G pairs with C
U pairs with A

segments of the RNA molecule not required for coding of the protein are removed and the remaining section reconnected. This process is called splicing and results in a messenger RNA (mRNA) ready to be used as a template for protein synthesis. The mRNA leaves the nucleus via the nuclear pores.

The mRNA is translated into a protein in the cytoplasm of the cell. This is done by transfer RNA (tRNA). There are different tRNAs for each of the twenty amino acids that make up proteins. One end of the tRNA molecule holds 3 bases called an anti-codon and these pair with the complimentary bases on the mRNA. On the other end of the tRNA is a specific amino acid.
The tRNA docks onto the mRNA with the help of ribosomes. The ribosomes have sites on which the tRNA molecules can bind. The ribosomes help the amino acid from the first tRNA bond to the amino acid of the second tRNA. On forming the bond the first tRNA molecules leaves and the process is repeated till the ribosome reaches a part of the mRNA that does not code for an amino acid. The ribosome dissociates from the mRNA and the protein is released. The resulting chain of amino acids then folds into a complex three-dimensional shape to form a functional protein.

Some characteristics are controlled by a single gene, such as: fur colour in mice; and red-green colour blindness in humans. Each gene may have different forms called alleles. The alleles present, or genotype, operate at a molecular level to develop characteristics that can be expressed as a phenotype. A dominant allele is always expressed, even if only one copy is present. A recessive allele is only expressed if two copies are present (therefore no dominant allele present). If the two alleles present are the same the organism is homozygous for that trait, but if the alleles are different they are heterozygous. Most characteristics are a result of multiple genes interacting, rather than a single gene

Students should be able to:
​Ordinary human body cells contain 23 pairs of chromosomes. 22 pairs control characteristics only, but one of the pairs carries the genes that determine sex.

Students should be able to
​Differences in the characteristics of individuals in a population is called variation and may be due to differences in:
• the genes they have inherited (genetic causes)
• the conditions in which they have developed (environmental causes)
​• a combination of genes and the environment.

​Mutations occur continuously. Very rarely a mutation will lead to a new phenotype. If the new phenotype is suited to an environmental change it can lead to a relatively rapid change in the species.

The use of hormones to treat infertility (HT only)