THOMAS TALLIS SCIENCE
Search
Chemists use theories of structure and bonding to explain the physical and chemical properties of materials. Analysis of structures shows that atoms can be arranged in a variety of ways, some of which are molecular while others are giant structures. Theories of bonding explain how atoms are held together in these structures. Scientists use this knowledge of structure and bonding to engineer new materials with desirable properties. The properties of these materials may offer new applications in a range of different technologies.

There are three types of strong chemical bonds: ionic, covalent and metallic.
​
​ 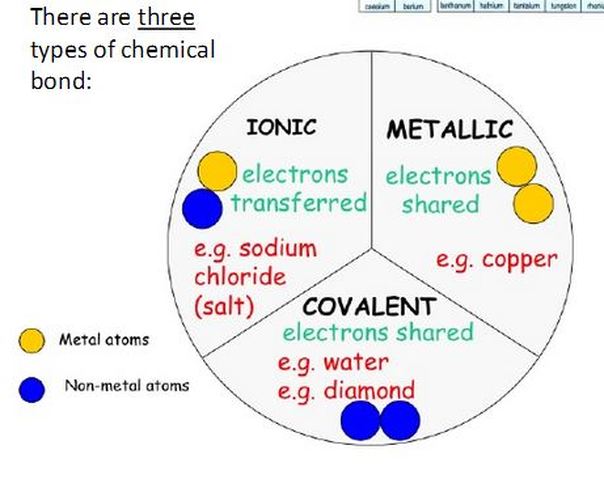 ​The ions produced by metals in Groups 1 and 2 and by non-metals in Groups 6 and 7 have the electronic structure of a noble gas (Group 0). The electron transfer during the formation of an ionic compound can be represented by a dot and cross diagram, eg for sodium chloride.​

​When atoms share pairs of electrons, they form covalent bonds. These bonds between atoms are strong. Covalently bonded substances may consist of small molecules.

​Metals consist of giant structures of atoms arranged in a regular pattern. The electrons in the outer shell of metal atoms are delocalised and so are free to move through the whole structure. The sharing of delocalised electrons gives rise to strong metallic bonds

Substances that consist of small molecules are usually gases or liquids that have relatively low melting points and boiling points. These substances have only weak forces between the molecules (intermolecular forces).

An ionic compound is a giant structure of ions. Ionic compounds are held together by strong electrostatic forces of attraction between oppositely charged ions. These forces act in all directions in the lattice and this is called ionic bonding.

​Ionic compounds have regular structures (giant ionic lattices) in which there are strong electrostatic forces of attraction in all directions between oppositely charged ions.

​These compounds have high melting points and high boiling points because of the large amounts of energy needed to break the many strong bonds. When melted or dissolved in water, ionic compounds conduct electricity because the ions are free to move and so charge can flow.

In diamond, each carbon atom forms four covalent bonds with other carbon atoms in a giant covalent structure, so diamond is very hard, has a very high melting point and does not conduct electricity.

Silicon dioxide (Silica)
Much of the silicon and oxygen in the Earth’s crust is present as the compound silicon dioxide also known as silica. Silicon dioxide has a giant covalent structure. Part of this structure is shown in the diagram - oxygen atoms are shown as red, silicon atoms shown as brown:

​Each silicon atom is covalently bonded to four oxygen atoms. Each oxygen atom is covalently bonded to two silicon atoms. This means that, overall, the ratio is two oxygen atoms to each silicon atom, giving the formula SiO2.  Silicon dioxide is very hard. It has a very high melting point (1,610 °C) and boiling point (2,230 °C), is insoluble in water, and does not conduct electricity. These properties result from the very strong covalent bonds that hold the silicon and oxygen atoms in the giant covalent structure.
​
Silicon dioxide is found as quartz in granite, and is the major compound in sandstone. The sand on a beach is made mostly of silicon dioxide.

Coarse particles are often referred to as dust. As the side of cube decreases by a factor of 10 the surface area to volume ratio increases by a factor of 10. Nanoparticles may have properties different from those for the same materials in bulk because of their high surface area to volume ratio. It may also mean that smaller quantities are needed to be effective than for materials with normal particle sizes
​

Nanoparticles have many applications in medicine, in electronics, in cosmetics and sun creams, as deodorants, and as catalysts. New applications for nanoparticulate materials are an important area of research.